PIPER WARRIOR II (PA-28) is a family of light aircraft built by Piper Aircraft and designed for flight training, air taxi, and personal use. The PA-28 family of aircraft are all-metal, unpressurized, single-engine, piston-powered airplanes with low-mounted wings, tricycle landing gear and has four seating positions. It has a single door on the copilot side, which is entered by stepping on the wing. The first of the Warrior series came out in 1974. From its inception, the PA-28 was meant to be an inexpensive airplane that offered safe flight characteristics and reasonable performance. The stabilator, sometimes described as a flying tail, is one of the Warrior’s distinguishing features. The entire horizontal tail pivots as one to act as the elevator. While it gives pilots a lot of pitch control, the stabilator was primarily used because it was considered more economical to build than a conventional stabilizer/elevator. The tapered portion of the Warrior’s wing also incorporates some washout. This decrease in the angle of incidence means that even when the wing root area has stalled, the outer portion of the wing continues to generate lift and the ailerons remain effective. All of that means the airplane is more controllable in an aerodynamic stall which adds to the safety characteristics which this aircraft became known for.

DJI MAVIC PRO is an unmanned aerial photography and videography drone for personal and commercial use released by DJI.  Dubbed as the coolest gadget since the invention of the iPhone, the Mavic Pro is truly a remarkable piece of technology.  It boast 24 processing units, GPS, sonar, obstacle avoidance sensors and 5 cameras on board. For its size it is one of the most technologically advanced drones available today.  Flight and range specs are also pretty impressive. Up front, it is also equipped with a 4K camera and super compact 3-axis gimbal. Plus, behind the camera, the drone also has DJI’s ActiveTrack and Optical Flow software, which allow it to track objects and sense obstacles (respectively) using nothing but the camera and image analysis algorithms. Thanks to its aerodynamic design, it can stay airborne for 27 minutes if flown at the optimum speed for energy consumption. One of the Mavic’s standout features is definitely its range. It’s equipped with DJI’s new OcuSync video transmission technology, which stretches the drone’s maximum range and provides a live HD video feed from the camera from up to 4.3 miles away.  The quality of the video transmission is mainly the reason why this drone is our aircraft of choice.  It enables a video feed from the drone to the VR goggles worn by our young aviators in full high definition resolution which is capable of creating the illusion of flying!

DJI VR GOGGLES are a revolutionary device when it comes to creating an immersive flying experience. Video goggles are not a new idea, especially when it comes to using them for drone flying, but the DJI goggles are the only ones on the market that feature two 1080p displays with an 85 degree field of view for each eye. The experience is equivalent to looking at a 216″ home cinema screen placed less than 10 feet away! Because you’re watching two 1080p screens, you’re actually getting a final resolution made up of more than twice the number of pixels that comprise a typical 2K display. It is simply amazing! What is also important for us is that you can also wear prescription glasses inside the goggles as some of our young aviators may have less than perfect vision, and still feel comfortable. The new Ocusync technology used by the googles is built into the headset, allowing us to deliver a live HD video feed directly from the Mavic Pro without the need for wires between the headset and the controller. We believe our young aviators deserve the best first-person viewing experience, and we fully expect that they will be thrilled with the fun and immersive experience of flying with us using these goggles. This technology also gives us the ability to bind two goggles to one aircraft so two children can enjoy the immersive experience together. 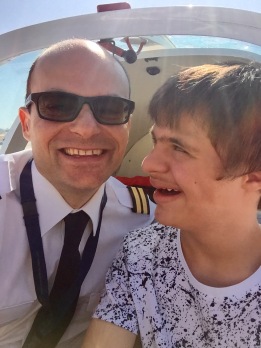 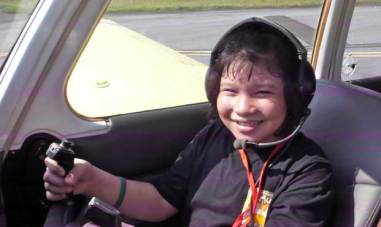 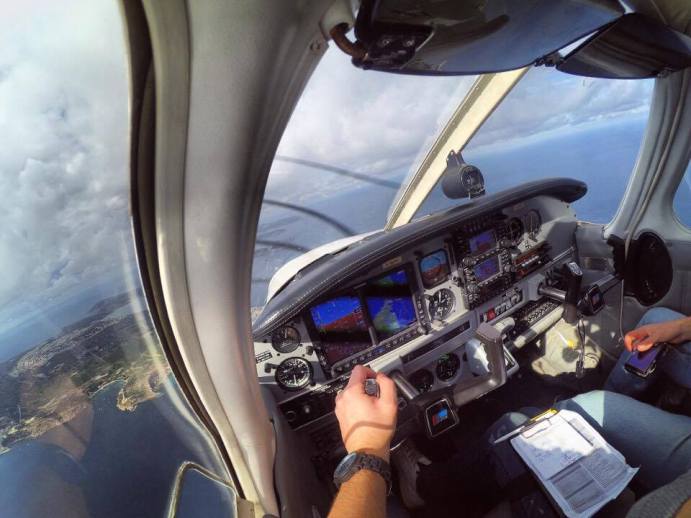 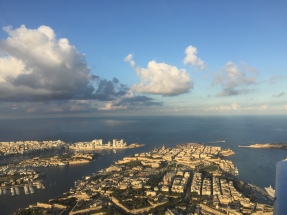 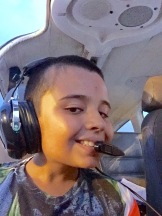 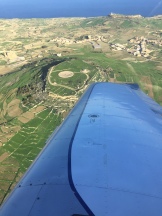